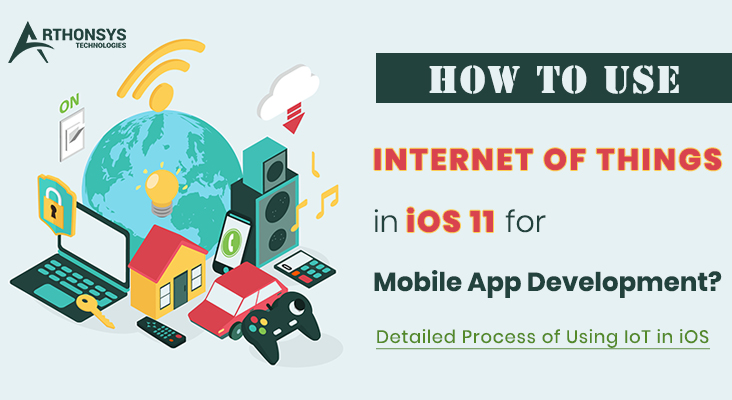 When multiple internet operated electronic devices like smartwatches, webcams, monitors, tablets, PCs, etc., are collectively referred, and then a terminology called ‘Internet of Things’ (IoT) comes into existence. IoT is turning out to be the technology of the future as various enterprises have embraced it – according to IDC prediction, in 2020 around $1 trillion will be spent by innovators on IoT technology. However, the use of IoT in iOS 11 is a new way that will empower iOS that makes it important to address topics like how to use IoT in iOS 11 for mobile app development

By narrowing down the operational area of IoT, it has been recorded that the IoT mobile application industry is exploding at a very high speed. That’s because the number of internet operated devices is rapidly increasing in an average household – from automation trend to advancement in the technology, everything has surged mobile app development using industrial IoT technology.

IoT and mobile app development both are the same sides of one coin because to create IoT ecosystem mobile apps are mandatory and to use automated apps, IoT devices are compulsory. So, they both are important to sustain one another.

How to Use IoT in iOS Swift?

The relationship of IoT and mobile app development is very deep, but when iOS 11 is thrown into the mixture, then this trio became highly powerful. The integration of IoT into iPhone app development is one of the hottest technologies making the rounds these days. Interestingly, how to use IoT in iOS isn’t a fun topic anymore as iOS app development has gone beyond entertainment. Thus, nowadays multiple iOS app development companies are looking for IoT trained developers to design web apps.

Integration of IoT in iOS

IoT is a powerful technology that enables developers to bring the real world into the app world. And, with the iOS app development framework, this process is elevated to the next level. IoT in the iOS Swift implementation process is more than just connecting a wide range of devices via Bluetooth or WiFi. When we are talking about how to develop IoT applications in the iOS framework, then multiple things need to be considered including –

IoT mobile application development is becoming mainstream technology due to the extensive support of the iOS app development structure. There are lots of amazing features offered by iOS that have given silver linings to the IoT app development process such as – Apple iBeacon and the intriguing Home feature now available in iOS 13.

The final nail in the coffin has been hammered by Apple HomeKit that is based on a highly secured IoT ecosystem. Apple HomeKit includes numerous home automation gadgets like Alexa that connects with multiple home devices over the internet. With the power iOS voice assistant Siri, users can control the HomeKit using Apple iPhones, iPods, Macs, etc., Purpose of Apple HomeKit is –

How to Use IoT in iOS?

Learning the curves of IoT in iOS mobile app development has clearly evident that this trio amalgamation is very powerful and futuristic. But, still, some of the iOS developers aren’t sure how they can use IoT in iOS Swift mobile application development process and how many uses exactly they can drive from IoT. So, if you want to learn how to use IoT in iOS, then you will be able to do –

The mobile apps industry has gained so much momentum in the last few years because apps provide personalized services to users. During the usage process, apps collect various types of data from the user to provide a customized user experience. It indicates that more users spend time on the app – more personalized experience will app offer on the basis of data retrieved during multiple interactions.

In this context, IoT can multiply the effectiveness of the app. Here, developers can use IoT streams while building the app so that more accurate data can be retrieved with the help of real-time data and location-based services. IoT in the iOS app framework will enhance the personalized user experience.

IoT technology has served numerous business areas and brought swiftness to it like the lighting industry, home automation, etc., this dynamic technology has shown a deeper effect on the mobile app development area by reducing the app built up time.

To develop an iPhone mobile application or iPad app, developers have to invest lots of working hours. But, when IoT facilities are used by iOS developers, then the app building process can be accomplished in much less time and eventually saves up efforts of iOS developers also. Thus, when app development time is reduced, then developers can utilize their free time to think of new innovative ideas to make the app more engaging.

√Positive Shift in the Efficiency

By intervening in IoT in the mobile app development process, you can welcome high efficiency and better management of the resources in your app-building concept. Interaction on IoT mobile applications became more convenient as multiple devices will be connected through a single main IoT interface.

This automated marriage of IoT in iOS mobile app development will enable developers to create smart homes and cities in a better manner. In the business industry, mobile development using industrial IoT tools ensures to free a good part of employees’ bandwidth so that the expertise of employees can be utilized toward core business matters. Moreover, IoT apps have already shown remarkable growth in the manufacturing and supply chain functions.

The demand for futuristic mobile apps has been increasing every day and better apps to fulfill future needs can be only developed with improved connectivity. Device connectivity is the future and iOS mobile apps should be designed to accommodate that functionality. If the app doesn’t hold up the adequacy connectivity, then the user will eventually lose interest in it.

Thus, developers are understanding this concept clearly that’s why they are working towards making future proof apps. With the common availability of smart devices, it is essential for developers to design mobile apps that can commute with multiple electronic devices to increase the adoption rate of the app. Moreover, if your app is already available on the Apple App Store, then you need to modify your app by adopting IoT.

Earlier, app developers only use to focus on making their app user-friendly because user comfort is the main priority. But, this isn’t sufficient anymore – today, one user want to use same application on multiple devices like on their smartphones, laptops, PCs, tablet, etc., thus, iOS mobile developers today need to develop mobile friendly app that can be easily used over different screen sizes and can be smoothly navigated mobile app user as well as web user.

To provide personalized user experience, mobile apps collect different pieces of personal information from the users like their email address, contact number, age, etc., but, here, we can’t ignore the fact that app is connected with the internet and this automatically raises concerns regarding the security of personal information. That’s why numerous people believe that mobile apps are the main culprit behind the majority of the data breach incidents.

However, this concern can’t be denied, but by using the defense layer of IoT – security threats can be minimized. IoT can develop a new security layer around the app using various technologies like data encryption, dual-factor authentication, and others to protect data of the user.

What Do You Need to Create IoT Application Under iOS Framework?

When you want to create a custom IoT device that isn’t available under Apple’s HomeKit, then you need to implement HomeKit Accessory Protocol (HAP). However, to obtain free access to Apple’s HAP you need to be a part of the MFi program. But, if you aren’t part of the MFi program, then you have to use third-party implementations like GO to write protocols for your IoT devices and then have to perform lots of coding work.

How to Develop IoT Applications?

Research hosted by Machina Research states that 90% of upcoming cars will be connected with your smartphones. So, when your cars going to be installed with IoT technology, then it becomes essential to understand how to develop IoT applications. An Internet of Things system contains the following components –