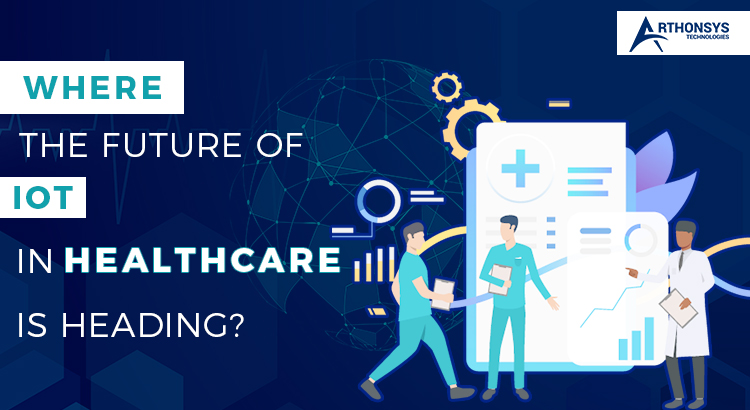 IoT or Internet of Things is the revolutionary idea that connects mechanical and digital machines or computing devices and enables them to transfer data over a network without human interaction. As communication between day-to-day devices becomes autonomous, IoT makes everything from automobile to household appliances, smart. Nowadays, the use of IoT in healthcare is a new trend. IoT application development is on a greater demand than ever.

About 60% of the global health-care organizations have incorporated IoT technology into their daily use.

Role of IoT in Healthcare Industry🏥📱

In healthcare, IoT focusses on, in a broad sense, mainly three sectors.

In the current year, more than 85% of the health-care organizations have adopted to IoT technology.

IoT devices would be capable of monitoring patients, recording their health status in a consistent manner which would otherwise be difficult for physicians alone to do. Below is a detailed discussion on the use of IoT in healthcare projects.

How does Internet of Things Help?🧐

The single most revolutionary step here is the use of wearable IoT devices. Wearable tech gadgets such as fitness-band, smartwatch, heart rate monitor, etc. are available in the market. Patients can use IoT devices of their own and can have a look at their own health status and keep a record of it. This is especially helpful for senior citizens as they can avoid traveling for health-checkups. There can even be a system to alert the physician when the health figures are out of the normal range.

With IoT, physicians are now able to keep track of treatment given to their patients. With technologies like wearable tech, useful data is extracted more accurately.

👉For example, before, physicians had to rely on devices that had to be operated by themselves such as sphygmomanometer (to check blood pressure). Now the wearable IoT tech devices are capable to measure and detect any anomaly in blood pressure, all on their own, thereby providing more accurate data.

Day-to-day activities in a hospital such as cleaning, environment monitoring, etc. can be performed at its best with IoT enabled devices. It would also help to regularly monitor the health status of various medical equipment such as gas cylinders, wheelchairs, stretchers, etc.

Smart Contact Lenses
A Swiss company named Sensimed developed smart contact lenses capable of measuring changes in eye dimensions. Smart lenses which are capable of treating Presbyopia is on its way.
Continuous Glucose Monitoring (CGM)
CGM based on IoT enables monitoring of glucose levels of patients at a regular interval. These devices can send these figures to a smartphone app so that the patients can see them.
Closed-loop Insulin Delivery
This IoT-based device is similar to CGM except that it is capable of accepting feedback and provide Insulin, if necessary. OpenAPS is one such device. This system would make sure that the blood glucose level is maintained at a normal level, always.
Sensors that work inside the Human Body
Micro sensors that are injected into the body via medicines send a signal to a receiver placed on the body.
Asthma Monitor
A wearable tech that notifies the patient of a potential Asthma attack and helps them to take remedial measures before it gets worse. It notifies the patient by vibration, of the possible attack and also notifies the physician. The device is incorporated with AI which helps it to learn the patient better, day by day.
IoT System to Test Blood Coagulation
This device enables patients with anti-blood-clotting disorders to check how fast/slow their blood clots.
IoT in Cancer Treatment
In 2018, a study revealed that cancer patients treated with IoT devices experienced less severe symptoms than those who did not. The system consists of blue-tooth enabled weight scale and blood pressure cuffs.

Major Benefits of IoT in Healthcare

Future of IoT in Healthcare🧐

Many companies provide IoT services in automotive, health care, education, logistics, etc. These application developers rely on various connected equipment to make IoT work seamlessly.
It did not take more than a decade for IoT to weigh its influence in all fields including healthcare. Although there are some challenges being quoted, the following are the future scope of IoT application in the healthcare sector.

👉To incorporate a better AI to analyze situations
IoT enabled with AI is a powerful system. At present, IoT devices in the health sector can monitor a patient continuously and send his/her health status to the physician. Future advancements aim at completing tasks at the device level itself. This would enable devices to perform even without the internet (in case of internet failure), and ensure crucial medicines/services are provided to the patients at the right time.

👉Better wear-able tech to provide personalized suggestions
The current wear-able devices are capable of monitoring health parameters such as heartbeat, blood pressure, body fat percentage, etc. This will evolve to give personalized suggestions to the user based on his/her health status. For example, for a person having a higher cholesterol level, the IoT-based device will suggest what all food to avoid and what all to include on a daily basis.

Sensors in the micro or nanoscale which could be sent inside the body without interrupting body activities will help in monitoring the health status of various organs. Also, for devices like pacemakers, these micro-sensors will notify the patient for a replacement if needed.

There are more than a million products in the current market with IoT enabled. IoT application development is on a greater demand than ever. The following are some of the instances where IoT applications find a prominent role.

📱 Teddy the Guardian, a smart and sensor rich toy checks a baby’s heartbeat, temperature and oxygen level in the room, when it is being hugged.

📱Sensors are placed on medicine bottles to send feedback to the physicians that they have been consumed by patients on time.

📱The Health and Fitness care App is a comprehensive IoT solution to cater to the needs of challenging healthcare needs.

A lot of companies today are competitively developing IoT applications not only to dominate the market but also with a vision to help people. This is more evident in the healthcare sector.
Since its inception, IoT had been helping numerous fields such as education, security, healthcare, logistics, banking, etc. For the healthcare sector, the role of IoT has taken a giant leap if we compare it with previous times and it is still growing.