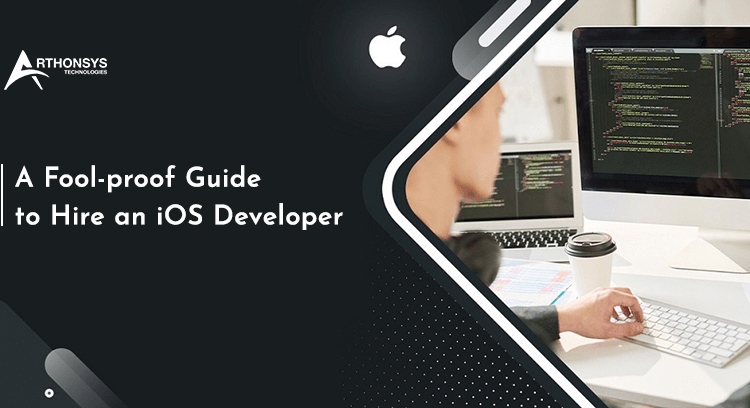 Do you want to create a UI/UX-rich iOS app?

Then, you have to first hire a dedicated iOS app developer. As of September 2021, around 26.75% of the mobile application market share is acquired by only iOS apps.

Thus, to make your iOS mobile app stand out among 3.74 million non-gaming and one million gaming apps, you need to embed some trendy features in your app.

You need to use artificial intelligence, virtual reality, or blockchain-like technologies to develop a robust iOS app. And for all this, you need to hire a professional iOS developer.

But that’s not easy—especially today when there are so many self-acclaimed iOS developers available.

How To Hire an iOS App Developer – 5 Easy Steps

As of January 2021, cumulative App Store’s sales were over 200 billion US dollars. That means if you develop a trendy, fast, easy, and unique iOS app today, you can generate a whopping revenue. And for this, all you need is to hire an experienced iOS mobile app developer.

So, let’s not wait and follow these steps to hire iOS mobile app developers:

First of all, you have to define your project needs before hiring a developer. This will help you understand what skill sets and experience level developers you need to accomplish your project.

You should also come up with your budget plan, divide your team duties and set basic milestones.

Up next, you have to choose the right model to hire an iOS app developer. Today, you have three main options to hire programmers or employees in general, including:

You can hire an individual iOS programmer if you want someone with a specific skill set. However, freelance iOS developers can handle the workload up to a certain extent only. And they are proficient in only one or two skills.

You can hire full-time iOS developers to work within your office. But this is a bit expensive hiring model as you have to pay a full salary along with additional employment benefits to developers. It can put an extra financial burden on you.

No matter whether you hire in-house or outsource iOS developers, you should look for certain hard and soft skills in the person. 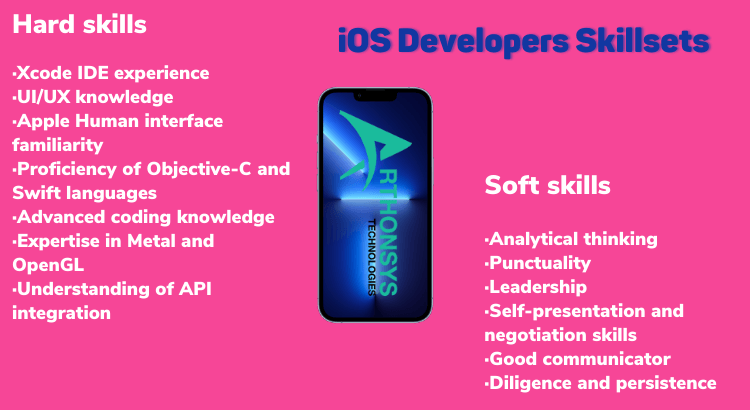 Developing an iOS program is an extremely technical job. Thus, make sure that your iOS developers must possess the following hard skills:

iOS developers have to work with an entire development team. They also have to lead a team and present your business model to other people. Thus, an iOS programmer should exhibit the following soft skills:

Depending upon your iOS app project scale and technicalities, you have to hire experienced iOS app developers. Generally, a mobile app developer’s experience level is divided into three levels:

They are the least experienced developers. Mostly, they are fresh out of universities and possess a primary knowledge of iOS development. If you want an iOS developer for basic work, junior developers are perfect for you.

These iOS developers have 2-3 years of experience under their belt. They know how to handle a mobile app development team and can even manage a whole project on their own. They also know how to design the UI/UX of an app. So, hiring these developers will be slightly more costly than juniors.

A senior iOS developer has over five years of experience. They have already handled iOS development projects in the past. These developers have a good network, leadership, and testing skills. When you want to develop complex apps and need a leader to manage your iOS development team, you should hire senior developers.

This is one of the vital steps of hiring an iOS developer. Today, the demand for iOS developers is pretty high; thus, you have to plan your hiring budget smartly.

Also, the experience level and hiring model determine iOS developers’ hiring costs. Thus, you should consider all these factors before setting a mobile app development budget.

Do you want to develop a dynamic iOS app within your budget?

Then, all you have to do is connect with Arthonsys iOS developers. Our highly experienced and skilled developers can help you easily manage and develop a futuristic iOS app.

You simply have to share your requirements with us today. And instantly, your iOS app development project will go on the floor. Let’s not wait anymore and rule the iOS market today!