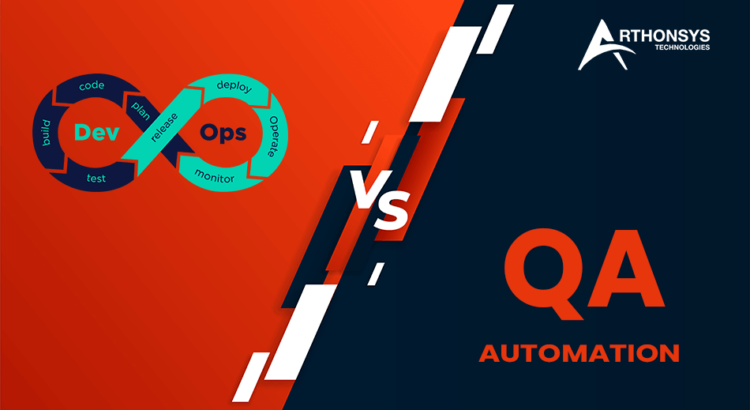 Do you know 88% of people will abandon an app because of bugs?

And, bugs are something that you can’t avoid today.

There are over 3.48 million mobile apps on Play Store and 3.7 million on App Store available. In this mammoth app database, it is impossible to create a bug-free experience.

But you have to make a bug-free mobile app if you don’t want users to abandon your app. And that’s only possible when you test, test, and test your programs a lot.

Testing here leads us to the topic of the hours — DevOps vs. QA automation testing. Both these terms have been creating a great buzz in the development industry, but not many people actually know the difference between them.

In fact, some people don’t even know that QA and security teams often work together throughout the DevSecOps. In a way, both DevOps and QA automation services are interlinked.

Well, let’s clear your confusion. This post will walk you through different aspects of DevOps and QA automation so you can select the right testing services.

What is DevOps Automation?

DevOps automation is the technology that increases business value with less human intervention. It creates feedback loops between operating and developing teams so that iterative updates can flow in the application development process.

DevOps test automation is a wholesome practice that merges the development and operation team into one DevOps team. DevOps automation engineers handle all aspects of a project, including ideas, production, and testing.

All in all, DevOps automation services can make more frequent changes to code and infrastructure compared to traditional management strategies.

What is QA Automation?

QA automation is a process of using separate software to run tests on the application you have developed. Earlier, human testers used to perform testing tasks with limited technical support.

However, the table is turned now. Today, QA automation testers use codeless technologies to test the new software. QA automation engineers practice continuous integration. They develop, test, and deploy multiple times per day rather than in different stages.

Therefore, QA automation services can detect serious bugs and security vulnerabilities in the early stages. And that helps to create a flawless user experience.

How to Automate DevOps in the Right Way?

For smooth DevOps automation, the right expertise and strategies are required. Along with the support of dedicated DevOps automation engineers, you need to focus on the following things to automate DevOps:

Dissecting the application isn’t sufficient for DevOps automation testing. Engineers have to understand every factor within the app’s user interface to evaluate critical areas of testing.

DevOps automation engineers collaborate with management and technical teams to expand the test coverage. DevOps test automation involves scripts and codes that can make testing more proactive rather than reactive.

Work on a culture shift

DevOps aren’t technical or management deployment. It is a cultural shift activity, which is closely monitored. Here developers and operations need to work on the same line to reduce inefficiencies in the development process.

How to Automate QA in the Right Way?

Like DevOps automation, you have to implement the QA automation in the right way to maximize your testing efforts, such as:

It is vital to outline from the beginning what you want to automate. This decision takes a high-level software understanding that your QA automation company can better help you with.

Once you have a clear automation idea, you can select the right tools and framework to complete the job. Depending upon your framework and automation scripts, you have to select suitable automation tools.

Now, you need to hire QA automation testers to create automation scripts. Your testers need to document your test requirements so that engineers can test those into automated scripts.

This is where QA automation engineers spend hours writing the cases and converting them to automation scripts. A new mobile application design test is built to verify and check different pressure points on the program by the engineers.

Smooth workflow: Different layers between your development and operation teams can decrease the overall productivity level. Thus, DevOps can stabilize the development environment with a well-balanced approach.

Reduce redundancy: Manually, testers have to perform many repetitive tasks that can take lots of time. DevOps automation can reduce all those repetitive tasks, freeing up the team’s more time to brainstorm new ideas.

Save costs: In the automated testing environment, companies can save more money as they have to spend minimal resources on redeveloping the product. Plus, the QA automation testers can work a lot faster than manual testers.

To combine the development and IT operations, DevOps automation engineers requires a variety of DevOps tools, such as:

Role of DevOps Engineers in Automation

Great communication skills to bridge the gap between software development and IT operations.

Role of QA Engineers in Automation

QA automation testing services are categorized into multiple phases. Therefore, QA engineers and testers have to perform vivid roles in the software testing, such as:

How Much Does DevOps Automation Cost?

Before adopting DevOps automation, remember that it is a transformation of both culture and development approaches. So, from establishing a trust culture in the organization to minimizing human intervention, DevOps testing automation will bring numerous changes to your organization.

So, it is hard to predict the exact DevOps automation cost without knowing factors like:

How Much Does QA Automation Cost?

QA automation testing can create a bug-free environment and improve delivery cycles for you. However, its cost and ROI development fully depend upon:

So, like DevOps automation, you have to first define your goals, and then your QA automation company can provide the exact automation cost.

Ready for DevOps or QA Automation

Whether you have selected DevOps automation or QA testing automation to make your program bug-free, it doesn’t matter. At Arthonsys, you will get full control to choose between QA and DevOps testing frameworks.

Yep, you simply have to tell your testing requirements to our engineers, and they will suggest the right solution within your budget. For more information, connect with us anytime.